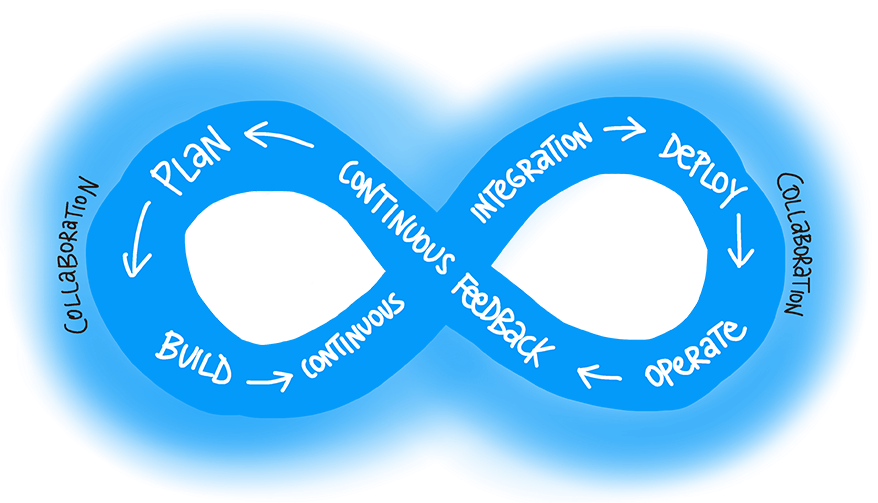 drives the ongoing merging and testing of code, which leads to finding defects early. Other benefits include less time wasted on fighting merge issues and rapid feedback for development teams.

of running applications including production environments for application health as well as customer usage, helps organizations form a hypothesis and quickly validate or disprove strategies.

DevOps is the union of people, process, and products to enable continuous delivery of value to our end users. The contraction of “Dev” and “Ops” refers to replacing siloed Development and Operations to create multidisciplinary teams that now work together with shared and efficient practices and tools. Essential DevOps practices include agile planning, continuous integration, continuous delivery, and monitoring of applications

Agile is a term used to describe approaches to software development emphasizing incremental delivery, team collaboration, continual planning, and continual learning. The term “Agile” was coined in 2001 in the Agile Manifesto.

The manifesto set out to establish principles to guide a better approach to software development. At its core, the manifesto declares 4 value statements representing the foundation of the agile movement. As written, the manifesto states…

We have come to value:

This does not imply the items on the right side of these statements aren’t important or needed; rather, items on the left are simply more valued.

Continuous Delivery (CD) is the process to build, test, configure and deploy from a build to a production environment. Multiple testing or staging environments create a Release Pipeline to automate the creation of infrastructure and deployment of a new. Successive environments support progressively longer-running activities of integration, load, and user acceptance testing. Continuous integration starts the CD process and the pipeline stages each successive environment the next upon successful completion of tests.

Continuous Delivery may sequence multiple deployment “rings” for progressive exposure (also known as “controlling the blast radius”). Progressive exposure groups users who get to try new releases  to monitor their experience in “rings.”  The first deployment ring is often a “canary” used to test new versions in production before a broader rollout. CD automates deployment from one ring to the next and may optionally depend on an approval step, in which a decision maker signs off on the changes electronically. CD may create an auditable record of the approval  in order to satisfy regulatory procedures or other control objectives.

Without Continuous Delivery, software release cycles were previously a bottleneck for application and operation teams. Manual processes led to unreliable releases that produced delays and errors. These teams often relied on handoffs that resulted in issues during release cycles. The automated release pipeline allows a “fail fast” approach to validation, where the tests most likely to fail quickly are run first and longer-running tests happen after the faster ones complete successfully.

Continuous Delivery is a lean practice. The goal of CD is to keep production fresh by achieving the shortest path from the availability of new code in version control or new components in package management to deployment. By automation, CD minimizes the time to deploy and time to mitigate or time to remediate production incidents (TTM and TTR).  In lean terms, this optimizes process time and eliminates idle time.

Continuous Delivery is helped considerably by the complementary practices  of Infrastructure as Code and monitoring. Continuously delivering value has become a mandatory requirement for organizations. To deliver value to your end users, you must release continually and without errors.

Continuous Delivery also supports two other patterns for progressive exposure beside sequential rings. “Blue/Green  deployment” relies on keeping an existing (blue) version live while a new (green) one is deployed. Typically, this uses load balancing to direct increasing amounts of traffic to the green  deployment. If monitoring discovers an incident, traffic can be rerouted to the blue deployment still running. “Feature flags” (or “feature toggles”) comprise another technique used for experimentation and “dark launches.”  Feature flags turn on features on or off for different end users based on their identity and group membership.

Modern release pipelines allow development teams to deploy new features fast and safely. Issues found in production can be remediated quickly by rolling forward with a new deployment. In this way, CD creates a continuous stream of customer value.

The Three Ways describe the values and philosophies that frame the processes, procedures, practices of DevOps, as well as the prescriptive steps.

emphasizes the performance of the entire system, as opposed to the performance of a specific silo of work or department — this as can be as large a division (e.g., Development or IT Operations) or as small as an individual contributor (e.g., a developer, system administrator).

The focus is on all business value streams that are enabled by IT. In other words, it begins when requirements are identified (e.g., by the business or IT), are built in Development, and then transitioned into IT Operations, where the value is then delivered to the customer as a form of a service.

The outcomes of putting the First Way into practice include never passing a known defect to downstream work centers, never allowing local optimization to create global degradation, always seeking to increase flow, and always seeking to achieve profound understanding of the system (as per Deming). 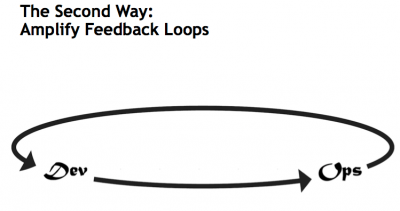 is about creating the right to left feedback loops. The goal of almost any process improvement initiative is to shorten and amplify feedback loops so necessary corrections can be continually made.

The outcomes of the Second Way include understanding and responding to all customers, internal and external, shortening and amplifying all feedback loops, and embedding knowledge where we need it. 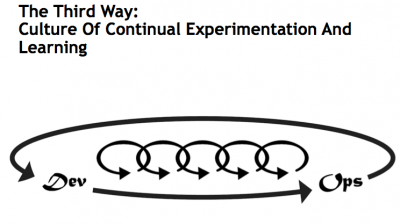 is about creating a culture that fosters two things: continual experimentation, taking risks and learning from failure; and understanding that repetition and practice is the prerequisite to mastery.

We need both of these equally. Experimentation and taking risks are what ensures that we keep pushing to improve, even if it means going deeper into the danger zone than we’ve ever gone. And we need mastery of the skills that can help us retreat out of the danger zone when we’ve gone too far.

The outcomes of the Third Way include allocating time for the improvement of daily work, creating rituals that reward the team for taking risks, and introducing faults into the system to increase resilience.

is the process of automating the build and testing of code every time a team member commits changes to version control. CI encourages developers to share their code and unit tests by merging their changes into a shared version control repository after every small task completion. Committing code triggers an automated build system to grab the latest code from the shared repository and to build, test, and validate the full master branch (also known as the trunk or main).

is the management of infrastructure (networks, virtual machines, load balancers, and connection topology) in a descriptive model, using the same versioning as DevOps team uses for source code. Like the principle that the same source code generates the same binary, an IaC model generates the same environment every time it is applied. IaC is a key DevOps practice and is used in conjunction with Continuous Delivery.

DevOps culture stresses small, multidisciplinary teams, who work autonomously and take collective accountability for how actual users experience their software. For a DevOps team, there’s no place like production. Everything they do is about making customers’ live experience better.

DevOps teams apply agile practices and include operations in the team responsibility. Teams work in small batches, focus on improving the end-to-end delivery of customer value, and strive to eliminate waste and impediments along the way. There are no silos and no blame game, because the team is mutually accountable.